As an 18-year-old Morehouse College student, Charles Person was the youngest of the original Freedom Riders, key figures in the U.S. Civil Rights Movement who left Washington, D.C. on two buses in May of 1961. Seven black and six white riders, including the late U.S. Representative John Lewis, set out to discover whether America would abide by a Supreme Court decision that ruled segregation unconstitutional in bus depots, waiting areas, restaurants, and restrooms nationwide.

Two buses drove through Virginia, North and South Carolina, and then to Georgia where they were greeted by Dr. Martin Luther King Jr., before finally arriving in Alabama. There, the Freedom Riders would find their answer.  The southern states would continue to disregard federal law and would use violence to enforce racial segregation. One of the two buses was burned to a shell with its riders narrowly escaping. While the second bus, with Person on board, was set upon by a mob that beat several of the riders nearly to death.

Many of the original Freedom Riders were college students. Person was a gifted student, a math and science enthusiast since childhood, dreaming of a career as a nuclear physicist. He received scholarships from Tuskegee University, Morehouse College, and several others and ultimately decided on Morehouse where he was active in many of the sit-ins.

Buses Are a Comin’: Memoir of a Freedom Rider, available April 2021, provides a front-row view of the struggle to belong in America. The book challenges today's youth from the perspective of a teenager in a previous era. "Buses Are a Comin’ is my effort to contribute at age seventy-eight with my words and my story, just as I sought to contribute with my body and my life in the early 1960s. Board your bus. Take the seat denied you. Make the country better for those yet unborn, those who will never know the seat you took, the ride you rode, the risk you accepted, the fare you paid, the change you made".

After news stories and photographs of the burning bus and bloody attacks were heard around the world, many more came forward to risk their lives and challenge the racial status quo, resulting in more than 400 Freedom Riders who demonstrated between May and December 1961. Person is one of two remaining Freedom Riders from the original ride. He is a sought-after public speaker and maintains active contact with schools, museums, and the activist community. 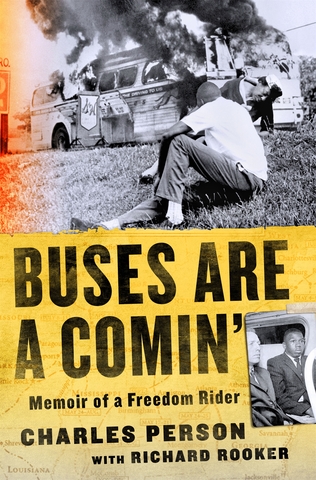