Stanley Tucci is an acclaimed actor, writer, director, and producer. He has directed five films and appeared in more than seventy, including Prizzi's Honor, Deconstructing Harry, The Devil Wears Prada, The Terminal, Spotlight, and The Hunger Game series.  He has also worked on countless television shows and a dozen plays, both on and off-Broadway.

In addition to his love for acting, Tucci admits that he has always been obsessed with food. He grew up in an Italian-American family that spent every evening around the kitchen table. He is a well-respected foodie and no stranger to writing about his love for Italian food. In 2012, he wrote The Tucci Cookbook, offering wine pairings, recipes, gorgeous photography, and family memories to a new generation of Italian food lovers. In 2014, he and his wife, Felicity Blunt brought us recipes from their traditional Italian and English roots.

Taste: My Life Through Food, available Fall 2021, is a reflection on the intersection of food and life, filled with anecdotes about growing up in Westchester, New York, preparing for and filming the foodie films Big Night and Julie & Julia, falling in love over dinner, and teaming up with his wife to create conversation-starting meals for their children.

Tucci recently went viral on Instagram when he demonstrated his mixology skills and now has a new audience of loyal followers. Currently, he can be seen in Supernova and the CNN travelogue, Stanley Tucci: Searching for Italy. 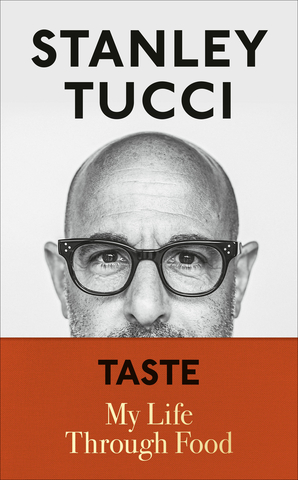