Isabel Wilkerson, winner of the Pulitzer Prize and the National Humanities Medal, has become a leading figure in narrative nonfiction, an interpreter of the human condition, and an impassioned voice for demonstrating how history can help us understand ourselves, our country, and our current era of upheaval.

Through her writing, Wilkerson brings the invisible and the marginalized into the light and into our hearts. Through her lectures, she explores with authority the need to reconcile America’s karmic inheritance and the origins of both our divisions and our shared commonality.

Poetically written and brilliantly researched, Caste: The Origins of Our Discontents invites us to discover the inner workings of an American hierarchy that goes far beyond the confines of race, class, or gender. A book steeped in empathy and insight, Caste explores, through layered analysis and stories of real people, the structure of an unspoken system of human ranking and reveals how our lives are still restricted by what divided us centuries ago. “Modern-day caste protocols,” Wilkerson writes, “are often less about overt attacks or conscious hostility. They are like the wind, powerful enough to knock you down but invisible as they go about their work.” Caste is available now.

Her debut work, The Warmth of Other Suns, won the National Book Critics Circle Award, the Heartland Prize for Nonfiction, the Anisfield-Wolf Award for Nonfiction, the Lynton History Prize from Harvard and Columbia universities, and the Stephen Ambrose Oral History Prize and was shortlisted for both the Pen-Galbraith Literary Award and the Dayton Literary Peace Prize.

She is a native of Washington, D.C., and a daughter of the Great Migration, the mass movement that she would go on to write about. She won the Pulitzer Prize for Feature Writing in 1994, as Chicago Bureau Chief of The New York Times, making her the first African-American woman to win a Pulitzer Prize in journalism. She then devoted fifteen years and interviewed more than 1,200 people to tell the story of the six million people, among them her parents, who defected from the Jim Crow South.

Wilkerson has taught at Princeton, Emory, and Boston Universities and lectured at more than two hundred other colleges and universities across the United States and in Europe and Asia. 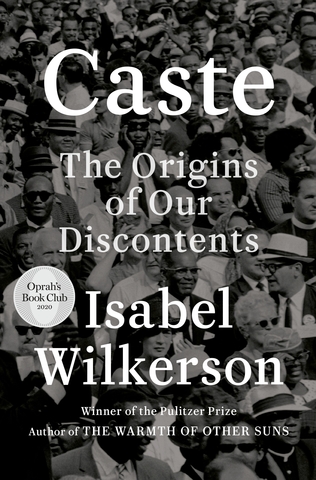